Picking an all-encompassing episode of a sitcom that gets to the very heart of a show isn’t always an easy task. However, with some sitcoms an episode will naturally leap out at you, and none more so than Bottom’s Gas – a farce of epic proportions that became a modern classic.

Bottom itself started out within the 1987 Ben Elton sitcom, Filthy Rich & Catflap. This show had been a sort of stepping stone for Rik and Ade between The Young Ones and Bottom. Eddie and Richie (who kept the same names in Bottom although Eddie was not then ‘Eddie Hitler’) were joined by Nigel Planer as Filthy Ralph, Eddie’s agent. This incarnation of Richie was attempting to break into the showbiz scene, and together with Eddie they cruised through a twisted world, which can only really be described as a sort of The Young Ones meets Extras hybrid, full of distorted versions of celebrities playing themselves and guest stars from the current comedy scene.

In the first episode of Catflap, Eddie and Richie kill a milkman and attempt to hide the body, so in many ways, it’s clear to see where Bottom’s Gasman drama found its roots.

Filthy, Rich & Catflap only ran for one series, but Rik and Ade returned only a few years later in 1991 with ‘Bottom’, what you might call a self-penned, stripped back version of Catflap.

Gas starts out typically enough for a Bottom episode. Richie and Eddie are playing cards, wagering household chores rather than actual money that they don’t have; they’re reasonably happy until a gasman knocks on the door to read the meter. He’s had reports that a neighbour has received a very high gas bill. His suspicions of foul play are realised when he discovers Richie and Eddie’s meter reads zero. The pair desperately try to convince him that they don’t use gas by making him a cup of steaming cold tea. However, when that doesn’t work, they result to pelting him with frying pans, and soon discover they have a dead body on their hands. ‘What are we gonna do?!’ Richie asks. Eddie responds ‘About twenty-five years I think’.

It’s one of those episodes where every line hits the mark. When Eddie holds a bat over the gasman’s head whilst asking ‘Do you want a cup of tea?’ was a masterclass in comic timing. Adrian Edmondson’s Eddie has a lot of classic lines in this episode, such as handing over the cold tea – ‘Better drink it before it gets warm’ and of course, ‘I’ll just put the kettle on…the floor’. Naturally there’s no shortage of classic lines from the incredible Rik Mayall either, Richie’s story about the pair of trousers that lived in the forest called ‘Dave’ was even incorporated into a Jackanory episode that Rik later narrated.

Rik always put everything into his performances and you can clearly see that here. His wide-eyed stares at the gasman amid the rising panic were all performed to perfection. His shouts of ‘GASMAN, GASMAN, GASMAN!’ as he first answers the door always stick in my mind. Could any other performer have carried off a character like Richie in a show like Bottom? 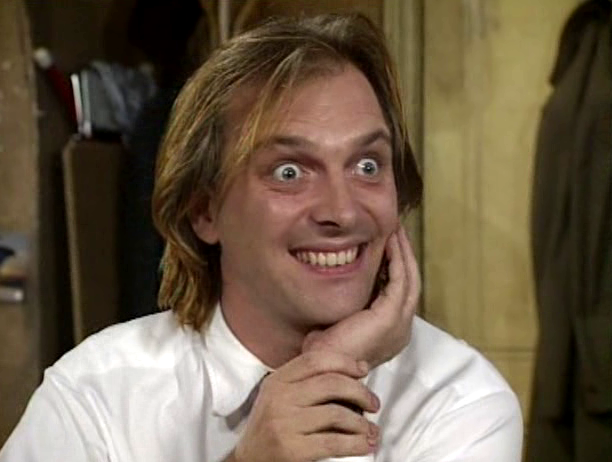 It was an episode of two halves, we get some Tom and Jerry style humour, as the gasman finally gets away, and we meet Mr Rottweiler and his sexy girlfriend. There’s even a retro 1950’s fridge in Mr Rottweiler’s kitchen where Eddie steals some food, stacking it all up on the table in full on cartoonish style. But the slapstick is never overdone, it’s just pushed far enough.

There’s a particularly great moment when Richie is walking down the stairs and there’s a gas explosion – the audience erupts into a spontaneous round of applause, there was nothing in particular happening on screen to felicitate it, it was almost as though the audience was applauding the episode’s achievements, albeit halfway through the show. They must have felt that they were watching a very special episode. Here, Lucy, from The Rik Mayall Scrapbook talks about her experience attending the recording of the episode:

It was incredibly hot in the studio that day, Rik and Ade were given these hand held mini fans to cool themselves down between takes, which they loved messing about with. Ade I remember got a telling off for still having his wedding ring on – which you can clearly see him wearing in the card playing scene. All went very smoothly, then at the first break, all Rik had to do again for another take, was to throw the playing cards down onto the table and bend forward (to get the right camera shot). Rik being Rik says “was that it?!” in his very distinctive tones. My friend and I found this really funny, he spotted us laughing, so played up on it even more, pointing at us and telling us to “get out, go on get out!” making us laugh all the more! He’d definitely clocked two giggly teenagers who were very easy to make laugh!

Now for the famous frying pan bit, this was hilarious, but definitely had to be done a few times, for timing issues and camera angles, but mainly because Ade gave Rik an almighty blow on the head, for real!  Which when you watch the episode you can see had to cut, but they kept in the almighty blow, you can hear the reaction from the audience too.  Rik in particular needed a fairly long break after that huge wallop! There were other timing issues too; when the gas man wakes up at the window, and they throw him out down the stairs, there were a number of takes to get this looking right, with camera angles, problem doors plus a few fluffed lines.

Rik looked particularly exhausted, he had put everything into his performance. Having to change his shirt several times throughout the recording, and the makeup girls were constantly around him, powdering him down and sorting his hair out. Ade on the other hand was the complete opposite, he seemed so cool and calm. The audience gave a long applause and there was plenty whooping and cheering. I expected them to come on and take a bow, but sadly not. I think the recording may have overrun a little and they probably just wanted to go home and relax, it had taken over 3 hours to film! Interestingly we found out that same evening Jennifer Saunders was also recording a new show, they didn’t tell us what it was called, but I suspect it was Absolutely Fabulous. Anyway, we slowly got out of our seats, we didn’t want to leave or for it to end. I was desperately trying to take in as much as I could (no photos were allowed), before we finally had to leave Television Centre.

It was such a privilege to be there that day, to witness Rik and Ade at work. They were hilarious, professional, witty, amazing, charming and exhausted by the end. The hard work and huge team effort that goes into making a studio audience sitcom is incredible, especially with such a visual and physical comedy like Bottom. It’s sadly a dying and considered dated genre. If you saw Ben Elton’s Ronnie Barker Comedy Lecture in 2017, you’ll know how passionate he is about trying to keep the audience sitcom alive – proving it can still be a popular form of entertainment with Upstart Crow. He described the process of what it takes to produce, why it’s so expensive to make, and how it captures an evening of comedic performance, really well. If you were also able to see The Young Ones documentary on UK Gold in 2018, How The Young Ones Changed Comedy,  Ade mentioned there, how when they were making The Young Ones, they thought at the filming, they had to try and keep the audience entertained throughout, well let me tell you, that must have been something they both found very hard not to do, because that’s exactly what I felt was still happening at the Bottom recording.

Thank you Lucy, for such a valuable insight, you were so lucky to have actually been there. It’s one of those recordings any comedy fan would have given their right arm to attend. To read about her full experience head over to The Rik Mayall Scrapbook.

The Young Ones was a milestone in the comedy landscape and Catflap was the warm up act for Bottom, but in terms of Rik and Ade’s great achievements as a double act, this is surely the pinnacle. Bottom’s Gas is an easy pick for one of the greatest sitcom episodes of all time. I think that it would be high up on anyone’s list – Its fast-paced lunacy is unsurpassed. 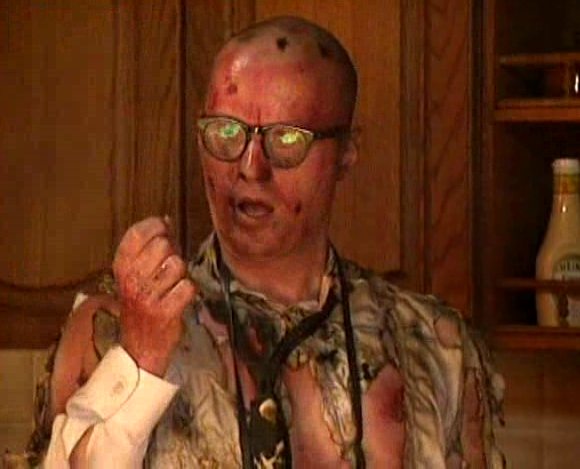